The perfect smartphone for Naruto Uzumaki fans has arrived in the form of the realme GT NEO 3 Naruto Edition. And everything from the design, down to its packaging has been inspired by the hit Manga series.

To that effect, the backside of the phone has been completely customized with the classic Naruto headband, Naruto patterns, Naruto family badge, and all of this is accented with flaming orange to match Naruto’s iconic outfit.

Beyond its Manga-inspired design, the Naruto Edition is quite unusual from both a design and development process. That is because it manages to have three different extras and colors on the back of its case – a bright orange finish, a matte black finish, and a three-dimensional metallic finish.

Next to the camera module, the phone adopts unique micro 3D patterns on its metallic back to create a neat 3D effect.  The device is also using an industry-first splicing process to combine two diaphragms into one which allows it to achieve multiple textures, colors, and grips in a single casing. 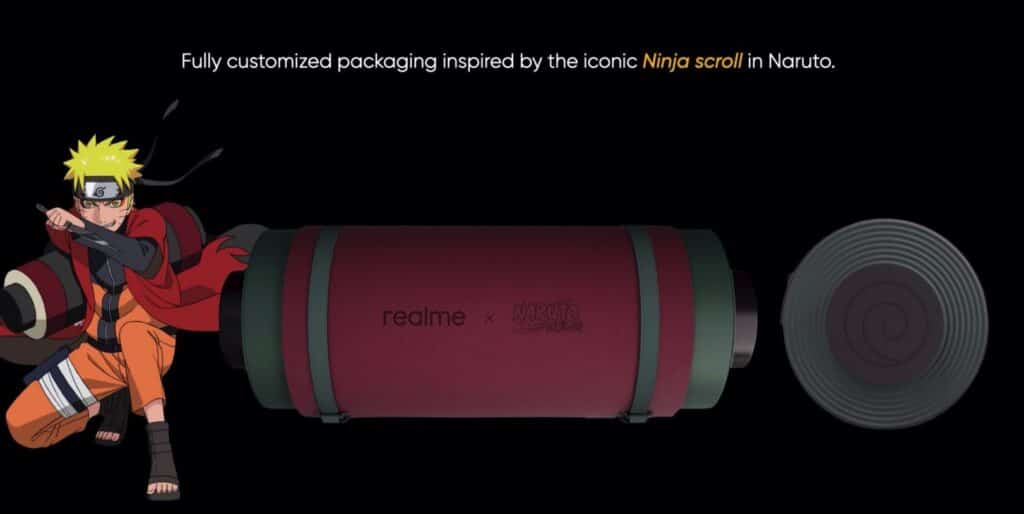 When it comes to the GT NEO3 Naruto Edition’s packaging, it has been fully customized to resemble the iconic Ninja Scroll in Naruto. The scroll is covered in PU leather material with classic sheepskin patterns. To unbox the phone, you need to pull out the smartphone tray, and it makes for quite a unique unboxing experience.

Inside of the box, realme has included a customized smartphone pin that emulates the Naruto family badge, and a 150W charging adapter.

There is also a custom Naruto phone case and 10,000mAh Power Bank available from realme that can be purchased separately.

When it comes to internal hardware, you can expect the same features of the realme GT NEO 3 device under the hood. That includes a 6.7-inch AMOLED 120Hz display, a 5,000 mAh battery, Android 12, and all of it is powered by a MediaTek Dimensity 8100 chipset.
Key Specs